We’ll do our best to respond as promptly and helpfully as possible.

*Please note that we are unable to offer any kind of intern training programme and don’t wish to support the exploitation of low and unpaid workers. 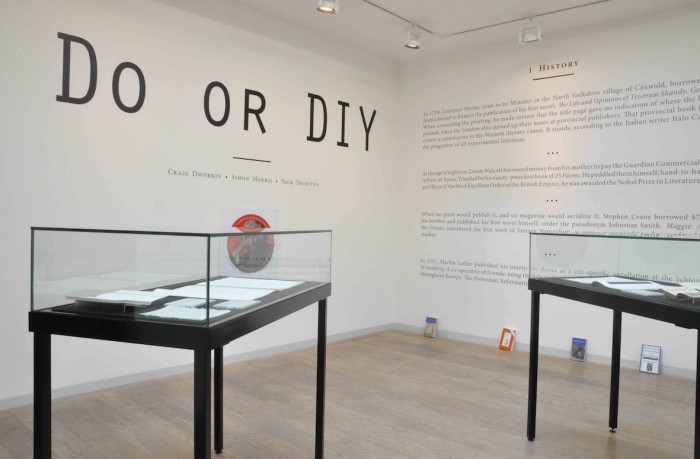 A six-week exhibition at the Whitechapel Gallery (London), marking the end of information as material’s one-year tenure as the Gallery’s Writers in Residence, and simultaneously marking iam’s tenth anniversary as an independent publisher of artists’ books and conceptual writing.

The exhibition will expand on a commissioned essay written by three of iam’s editors – Craig Dworkin, Simon Morris, and Nick Thurston – as the Foreword for the 2011 London Art Book Fair. The first part of that essay offers a miniature history of self-publishing by writers now canonised by the English-language literary industry, whose D.I.Y. actions have been covered over to negate the stigma of ‘vanity publishing’. The second part of that essay is a concise polemic, advocating a D.I.Y. approach to publishing in the current digital epoch, as a praxis against the drives of ‘vanity publishing’, and as a positive socio-political choice. It concludes, quite simply: “Don’t wait for others to validate your ideas. Do it yourself.”

The exhibition will re-present that essay, plus cabinets of some self-published first edition books cited in the essay, alongside an exposed selection of contemporary mass-market re-issues of all the available publications that are cited in the essay. In doing so, the show will present a set of ideas and artefacts that reveal the concealments required by the value structures that underwrite canonising historiographies and culture industries.

The exhibition will tour in August to Shandy Hall, former residence of the eighteenth-century novelist Rev. Laurence Sterne, whose secret self-publishing of his most famous work, The Life and Opinions of Tristram Shandy, Gentleman, begins iam’s miniature history. There, at the Laurence Sterne Museum, the exhibitionary material will intervene in the popular NGS-listed garden.

In conjunction with the touring exhibition, Do or DIY will be re-released as a standalone handbook, self-published by Information as Material to be distributed at both exhibitions and internationally thereafter by iam’s partner, Conerhouse Publications (Manchester).

In the winter of 1912 Marcel Proust submitted a manuscript to three prominent Parisian publishers: Fasquelle; Gallimard; and La Nouvelle Revue Française. Within weeks, all three had rejected the project. Fasquelle explained that they “did not want to risk publishing something so different from what the public was used to reading.” That ‘something different’ was the monumental modernist novel In Search of Lost Time. Soon another publisher, Ollendorff, had also rejected the manuscript, despite Proust’s offer to pay for the printing himself. Alfred Humblot, a Director at Ollendorff, rebuked: “I don’t see why any man should take thirty pages to describe how he turns over in his bed before he goes to sleep.” The book was eventually published by Grasset, but only after Proust agreed to finance both the production and publicity. André Gide, who had been the editor at La Nouvelle Revue later confessed: “the rejection of this book will remain the most serious mistake ever made by the N.R.F. – and (since to my shame I was largely responsible for it) one of the sorrows, one of the most bitter regrets of my life.”

Made possible thanks to the generous support of Arts Council England.

Do or DIY – exhibition 1